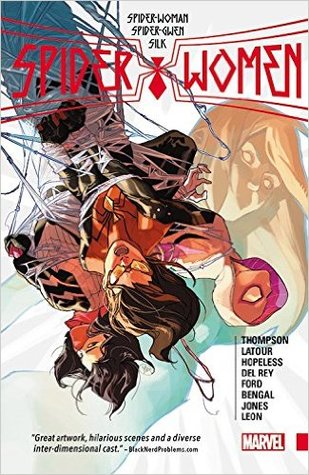 I LOVE Spider-Woman! First she’s an Avenger, then she quits to do street-level crime, then she’s pregnant and subsequently a new mom, and she’s a MENTOR! Where has she been all my life?

Oh yeah, covered by the mountain of overly marketed male heroes. Okay, to be honest, I hated her old costume and the way they drew her until Febuary ’16, so I wouldn’t have picked it up until the awesome new costume after the drama about the pose. If you aren’t familiar, here’s an article covering that whole issue. It’s from the Mary Sue, who I just adore also. Let’s get back to the review, though.

Spider-Gwen, Spider-Woman, and Silk come together for the Spider-Event of 2016! Jessica Drew, Spider-Woman, has decided to step-up her mentoring of the younger, less-experienced Gwen Stacy and Cindy Moon. But when the trio gets trapped in Gwen’s Universe, at the hands of an alternate Cindy Moon and her sinister organization S.I.L.K., there’s not time for any more practice. This action-packed story will change the heroic course for all three Spider-Women!

Yeah, Silk is here too!! Okay, I’ll deal with Spider-Gwen’s presence. I even get her a little better now, but let me not get ahead of myself. When I picked this up during the same B&N dinner that I read and fell in love with Spider-Woman, I had literally no idea what was going on. I took it off the shelf because I love Silk and I had just grabbed Spider-Woman anyway. I did also get Spider-Gwen and I’ve read her first issue but it’s not my thing. She seems to be the most beloved of the Spider-Women, given that I see her hoodie all over the place on women at cons and stuff, but I don’t like her comic. I like the idea of her comic but learning new Earth’s in new dimensions isn’t fun for me, despite my affinity for science fiction and occasional delve into fantasy. I just can’t, not for a comic like this.

Still, the inter-dimensional  thing totally works in this volume. I think it’s because we have a bit more of a gateway as things are explained but not really info-dumped or left to be figured out. It is a little interesting to think that there could be an alternate you somewhere out there with a slightly different back story and making completely different choices. Like, completely, apparently and I don’t want to spoil a big reveal but choices aren’t the only things that may be different.

As in the description for the issue, the women get together for a mentoring session. I absolutely love that. In all the social media circles I have frequented for this blog and  the one I previously had that focused much more on feminism than books, I read a lot about the importance of women having mentors and of women being mentors to other women. This should not be underestimated and it looks like Marvel is paying attention. While mentoring shouldn’t be inherently gender-based (and she has men she mentors too!), there is an element to our lives that are soaked in our gendered experience and what society throws at us on account of this aspect of our lives. The male superheroes have been seen mentoring each other for a long time now and it’s great to see the women get it too. (I can’t really speak to the prevalence because I’m relatively new to comic reading, but I’m just happy to see it’s presence here) The mentoring session gets hijacked by some villainy and all three women have opportunities for growth.

It’s an interesting arch and tact to take with these three women at such transitional times in their lives. Spider-Gwen and Silk are new heroes and figuring out their individual ways in the landscape of their own Earths and Spider-Woman is getting used to this superhero/mom thing. I adore that she brings a breast pump and that she has to stop and pump. The comic manages to make it look like it’s manageable to work and give your kid breastmilk while not even insinuating that not doing so is somehow shameful. As a working mother, it’s fairly empowering in that regard.

Our younger heroes are going through entirely different problems and Spider-Gwen doesn’t hide her distaste for the not-so-easy way that Silk is coping and handling the hero thing. Like I said before, I’m not a Spider-Gwen fan, but I felt like I understood her issue with Silk and I appreciated her eventual ability to have a teensy bit of empathy for Silk’s plight. Also, I get the problem with Silk and her flighty habits on account of her extreme isolation for so long. It can be hard to assimilate to a  team when you’re used to not even having someone to talk to, but still. She treats Silk the way the Mary Jane’s treat her and she should know that it’s rough from the onset. She should get that it means there’s more going on in her head but that’s more a mark of experience than compassion and it’s fitting that Spider-Woman is the one who gets it.

As far as the art goes, this one was not the best. It’s not that it didn’t have great art but it combined three different comics with three different sets of creators for a few issues and so the look of it is inconsistent. This aspect alone wouldn’t keep me from buying it but it’s was a little annoying anyway and I’d rather let you all know ahead of time. I get what they were doing, I just wish the art had been consistent throughout the issues, but then it would have been strange for the art within each series to change and there I would go in circles again. That’s not the point. It was a necessary evil but that doesn’t mean I had to enjoy it.

I loved the whole concept of this volume and the execution was great (the art thing is really all that keeps it from being perfect). Spider-woman is definitely my new favorite superhero but that doesn’t lessen my love of the others that I have been following. I have got to work harder on catching up on all the titles I enjoy following (Silk included) and add this to the list.

I had  read it in store while having a nice dinner at Barnes and Noble, but it can be purchased through both Amazon

and the Book Depository.