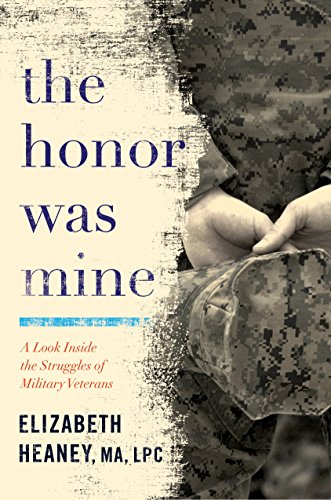 This was one of those books I picked up purely for the title. It captured my attention and then the subtitle made it a must-have for me. I didn’t even bother reading the synopsis before I bought it on Amazon, here. It helps that it was on sale at the time.

Since I didn’t read the synopsis, I didn’t realize immediately that it was a memoir of a counselor but I loved that about it even more. I knew that counselors were available these days, but I hadn’t realized the many capacities they served in.

A young combat veteran hides in his closet under a pile of clothes on bad nights. Another, home for five days, can’t figure out how to talk to his wife. And a commander’s spouse recounts the soul-draining effect of attending nearly one hundred memorial services…

When therapist Elizabeth Heaney left her private practice to counsel military service members and their families, she came face-to-face with unheard-of struggles and fears. Emotions run deeply—and often silently—in the hearts of combat veterans in this eye-opening portrait of the complex, nuanced lives of service personnel, who return from battling the enemy and grapple with readjusting to civilian life.

Presenting the soldiers’ stories—told in their own words—as well as her own story of change, Heaney offers an intimate perspective, not of war itself but of its emotional aftermath. Some of these stories scrape the bone; others are hopeful, even comical. Every one reveals the sacrifices of those on the front lines and the courage, grace, and honor with which they serve.

I think my favorite thing about the book was that Heaney was honest about her preconceptions about military personnel and the way her ideas of that community grew and changed. I also greatly appreciated the way she introduced the book, explaining first her decision to refer to all servicemembers as soldier (no matter how much I don’t like that as a typical choice for talking about the military) in order to help maintain privacy and an in depth explanation of other steps that were taken for that. It was great because the explanation acknowledged the differences in the branches while still helping the average civilian understand the point of the book rather than get caught up in jargon.

She goes on to relate how she got into the work, acclimated to it and some of the stories she heard. I loved that the book included that military issues are not an endless parade of PTSD symptoms. They have all the other issues that everyone else has with PTSD topped onto them. There’s also the many marital problems that come from the long and frequent separations. It’s not as simple as missing someone and deciding whether or not to stay with them. There are lots of adjustments on both ends of a deployment that need contending with. She doesn’t go into it as if the book was about to be a series of case studies, instead she relates bits and pieces of conversations that illuminate the problems that military personnel deal with.

It is just a look, it’s not a study and it’s not in depth. It’s an introduction to the lifestyle, struggles and sacrifices. It’s the kind of book that may help someone unfamiliar with the military understand that they are not the stereotypes that can be propagated about them. I also loved it as a memoir. I loved the way Heaney told her story among those of she served and the way she maintained balance throughout the period.

I actually loved every minute of it and would recommend it to others, but not necessarily military members who have seen combat. It may be a little jarring for them, a little triggering in some instances.