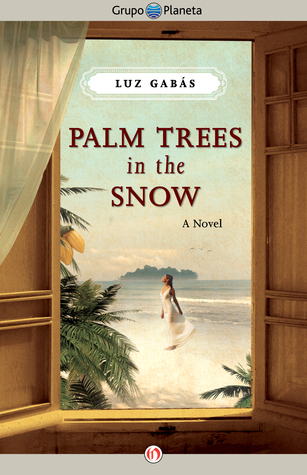 I’ve had this book for a while, it was one of my Kindle Firsts from the beginning of the year but it was so long of an audiobook that I procrastinated. I thought of it again when I was looking for another audiobook for Women in Translation Month. Having the rest of the month to finish all 20 hours of listening didn’t seem so daunting anymore. Yep, 20 HOURS. It was a good book and worth the read.

Palm Trees in the Snow covers quite a few issues as it moves through the story. There is the good and bad of colonization, scenes in Spain and the island of Bioko, love, unrequited love, brotherly love, interracial relationships in different periods, conflicts over independence, rape, and so much more. It does a great job of representing the conflict between what people believed they were doing when they colonized others forms of civilization and what was really going on. The story does center quite a bit on the white people who colonized the island during the fifties, but there is respect given to that colonizing was not actually the best thing for the inhabitants of the island. To me, it really humanized both sides without casting judgement on either. I particularly love books that do that, not because I think of oppressors as innocent, but I like it when authors let me see it for myself.

I hesitate to rate it higher, despite all the issues it deals well with, because the story itself wasn’t unexpected nor did it give some new insight into what colonization was about. It was a good story that I enjoyed reading. I loved the twists and turns and that made me doubt where it was going, but it pretty much went where I expected it too. The time jumps were a big part of the fun between Clarence’s investigation into her family’s history and hearing the firsthand account of Kilian. As mentioned above, I listened to the audiobook which had two narrators to accommodate the two point of view characters. They were Angela Dawe and Malcolm Hillgartner.

As I said before, it was a Kindle First for me but it is still available at multiple outlets. Click on the cover for the BookLikes list or add to Goodreads check out their options.