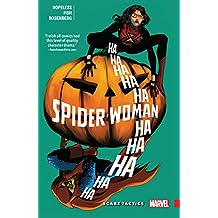 I read the first two volumes in this run a while back and had been meaning to catch up on her. The others are reviewed here: Volume 1, Volume 2, and Spider-Women.

I finally got a chance to read this one and it was a good send off to the run. I’m not so excited that her run is over, but this is a great set of volumes for this story. Spider-Woman is a well established Marvel character and though I don’t expect her to be gracing the big screen any time soon, I also don’t expect her to go away either.

As far as this volume goes, it showcases some of my favorite features of Spider-Woman as well as some favorite characters in her world. Roger, or Porcupine, isn’t the best guy in the world but he’s always been great to both Spider-Woman and Jessica Drew, so any trouble he’s in, she’s in also. Part of what’s been great about this single mom superhero is her support system and that it’s multifaceted. When one part of it runs into trouble (which is bound to happen when everyone is a hero, right?), there are more heroes to pitch in and give Spider-Woman the time to take care of business.

I’m not a fan of this cover but Hobgoblin does make for a pretty amazing bad guy. I’m not big into the Spider-Man comics so I never realized how big a bad guy he is. He really pushes Spider-Woman to the breaking point, even making her mad enough to get reckless and not think before jumping into a fight.

The best part is the end, though. They knew it was the end of the run/series for now and included a denouement that was really everything I could have asked for. It’s great because I think we’ve all been there with someone that our friends don’t really get until they see the magic in action. It also answered a burning question of mine ever since I saw Spider-Woman’s swollen belly grace the cover of the first issue in this run.

It’s been fun and I’m sad to see the run over, but I have hope that Spider-Woman will grace the cover of another series one day! If you hadn’t checked out her series before, this is a great time to binge through its three volumes and Spider-Women!