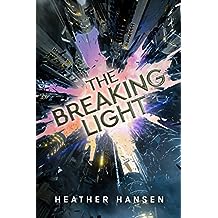 This is a fun little Romeo and Juliet story. I know, fun and Romeo and Juliet story don’t really belong in the same sentence, but trust me here. It’s pretty obvious from the description that I had read on Amazon that it was going to go this way too, but it’s not entirely predictable either. Hanson changes just enough to leave a little doubt in each scene as to how it’s actually going to go and then I loved what she did with the end.

As some of you may know from other reviews, I’m not a fan of insta-love in books. It does get a little thick sometimes but not intolerable. It got a little close to intolerable but then I’d just remind myself that it’s a stereotypical YA that is loosely based on Romeo and Juliet, the most insta-lovey story ever written. So, I felt compelled to go with it.

It’s a story that I would have loved when I was an actual youth. Everything is a little too urgent now and I do have a pet peeve about all the adults being either corrupt or inept. I’m a little amazed that I still had such a good time with the writing despite that it had some of my least favorite YA tropes. I did find myself rolling my eyes often, but the second tier characters really had enough going on to keep me in the game to see whether this Romeo and Juliet ended up smarter kids than their predecessors.

I have to admit that I was pleasantly surprised. As I mentioned before, there were just enough changes to the storyline and some details that I wasn’t entirely sure how some things were gonna go. Hanson also added a lot of depth to the core story and made it much more interesting than it’s predecessor for me. That’s not to slam Shakespeare, I know he’s not for everyone but I’m generally a fan. This was just my least favorite of his stories because insta-love.

I’ll probably check out the second book based on how the end went. I kinda love the idea of seeing what went down after Romeo and Juliet shook things up even way back when. I’m intrigued to see where it goes.

The Breaking Light had been one of my March Kindle First selections and I feel terrible that I’m just now getting to it. I figured out last year that I particularly like waiting to get the audio upgrade since I get to listen to my books much more consistently than read them.