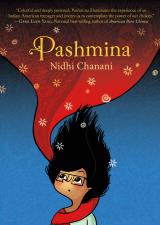 My first Read Harder 2018 book! This was my choice for task #8, a comic written or illustrated by a person of color. Though I try to read about other cultures, I do have a tendency to get the terms for things mixed up. I do this with my own mix of Cuban and American things, routinely forgetting what my mom calls some  things in Spanish while others are burned into my brain. That said, I had forgotten that a pashmina is kind of scarf. Okay, that’s not really what the word means, but google pashmina and you’ll find cashmere scarves. The word itself is a derivative of  the Persian word for wool according to a few websites. In the story, it’s a specific wrap, the one wrapped around our protagonist on the cover.

I had originally expected pashmina to be the name of our protagonist, which is actually Priyanka. She’s an Indian-American teenager plagued by not quite knowing her whole story and feeling incomplete on account of it. She has a mysterious father that her mom won’t tell her about, nor will she do anything to promote Priyanka’s image of India. She has an uncle and aunt that she loves but is selfish with them. And then Priyanka finds the pashmina.

First of all, I love the art. The comic itself is primarily in black and white. Color comes in at special moments and in special places and offers this ethereal feeling that plays perfectly into the plot of the story.

The story itself follows a fairly typical coming-of-age narrative where the protagonist has something missing and must go in search of it, without her normal comforts of home. I adore the way the story affects more than just the protagonist too. Once I got to the end, I was smitten with not only Priyanka’s journey but with Shakti as well. The concept of the pashmina is wonderful. I wish it were real.

I also loved the inclusion of all the Indian foods they ate, terms for things and the glossary in the back. It’s often a sign to me of things not actually written in Miami when writers miss the little things, like Vicky Bakery or Cuban coffee or the absolute density of Hispanic people of many backgrounds in Miami. It’s also in all those words that are better in Spanish than English or at least more precise and that no one uses the English word for down there. I imagine that Chanani included the terms that felt natural to her and the characters ate typical foods for first or second generation Americans. I know I eat a lot of Cuban food whenever I can, but my son hasn’t quite found a fondness yet, while other family members never stray from a more Cuban diet.

Altogether, I really enjoyed the comic! It had a solid message and I hope more people find it. I know it was on several other lists for this year’s Read Harder Challenge, so I’m sure it’s going to be a popular comic for a while. It’s also the first book I borrowed from the library in my new location which uses Cloud Library rather than Overdrive, as the others have. I am eternally thankful for libraries and digital libraries have just made my life all the easier. It can also be purchased from several outlets, check out the options at Goodreads or just add it for later!

How's your meditation practice going? I'm still reaching for it through asana practice and sometimes stumbling onto it but mostly stuck at dharana, which is okay too. As I've been going through the Yoga Sutras of Patanjali and looking at my practice, I've seen how much more there is to yoga and I'm excited about continuing to study and continuing to practice yoga in more ways than asana alone. Finding dhyana, or not sometimes is up on the blog today at www.allmybalancingacts.com. I'd love to hear from other yogis about dhyana in your practice! #yoga #yogisofinstagram #yogi #yogaeverydamnday #yogaeveryday #dhyana #yogasutras #8limbsofyoga
Another Read Harder book done! ⠀ Mastering the Art of Soviet Cooking is a brilliant memoir that includes walks through the history of the Soviet Union in terms of the food. I loved every minute of it. A full review is up on the blog today (https://buff.ly/2P9tID2)⠀ ⠀ #readharder #readharder2020 #readhardertask13 #foodbooks #booksaboutfood #memoir #womensmemoir #booksbywomen #readharderchallenge
A part of yoga practicing yoga every day is remembering the first two limbs too. I struggle with this question every day, several times a day, and I don't think I'm alone in that. Still, making the choice to share my daily yama or niyama struggles and successes, may help. Starting today⠀ ⠀ #yoga #yogagirl #yogis #yogisofinstagram #yogaeverydamnday #yogaeveryday #yogaeveryblessedday #satya
The Other Americans is an amazing book. In it we see so many other iterations of what it means to be American and the way that all of our quirks, biases, experiences, cultures, and backgrounds can either interconnect us or splinter us. I found it for #readharder this year and books like this are one of the reasons I love doing that challenge. A full review is up on the blog today (https://buff.ly/2tNatHU). This was my pick for Read Harder Task 3, a mystery where the victim is not a woman. ⠀ ⠀ #books #booksbywomen #booksbywoc #bookstagram #readharderchallenge #readharder2020 #readhardertask3 #lailalalami #theotheramericans
Sharing some social commentary on World Day of Social Justice. The people writing these books strive to see social justice and enact what they can. Knowing the struggles of other groups helps us create space for them where we are and brings everyone together. These books are by or about groups that need social change. ⠀ Full list https://buff.ly/382osZz⠀ ⠀ #books #bookstagram #socialjustice #socialcommentary #worlddayofsocialjustice
I've come to dharana in my study of the Yoga Sutras of Patanjali. I've experience dharana, which is concentration, and it's definitely another of the 8 Limbs of Yoga that has changed my life. It helps me focus which helps me figure things out later. Ardha Chandranana, half moon pose, was a big help in reaching dharana. A big part of that is transitioning gracefully from the pose before it. This pose is also one that helped me learn to reach higher to stabilize when I think I'm going to fall. It's an important lesson in yoga and for life so far. ⠀ ⠀ #yoga #yogisofinstagram #yogi #8limbsofyoga #dharana #yogasutras