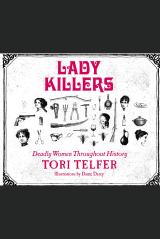 What a delightfully creepy book. I’m not really a true crime fan because it makes me even more paranoid than I already tend to be, but I had to find one for Read Harder this year. I still couldn’t listen to it right before bed but it was fascinating. Telfer brings together a set of women from our near to distant past to show how women have never been the pure maternal souls we so often get put on us.

The most recent lady killer mentioned was in the 1950’s, which I appreciated. Lady killers may not be a thing of the past only, but I feel I’m better off not knowing popular contemporary ways to get rid of people. It also helps that not one of these women didn’t really get away with it. I don’t consider that a spoiler because there’s no other way to get the details without extensive documentation plus the detail that it was definitively a woman. I think one did elude the police, though.

The tales collected are incredibly detailed, including methods of murder, motives, rumors, lore, sentences, and what alerted people to their deeds. The women themselves are from many countries and eras and of every class. They were in a variety of circumstances and their actions were the result of situations from excessive abuse to excessive privilege. The author admits in the end, though, that she was unable to find sufficient information to include women of color and mentions a few she had looked into along with a caveat that this does not mean they didn’t exist among other races.

The book itself was written to not just refute the idea that women can’t kill even their own children but to combat the erasure that happens when women do kill. The point is not to glorify this sort of behavior, nor to excuse it, but acknowledge that it is there, despite popular belief. Many of these women got away with murder for as long as tbey did because no one around them could fathom that a woman was capable of such a thing.

It was likewise interesting to read about the preferred methods of murder for women over the years, especially having seen several mentioned in some of my favorite fiction, like Etiquette and Espionage. We continue to forget what women can be capable of when push comes to shove and while I nor the author condone murder, we recognize that women should not be underestimated in this regard either.

I borrowed the audiobook from my local library but it can also be purchased. Click on the cover image to see the options BookLikes offers in your area or click here for Goodreads.