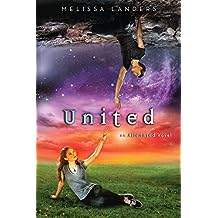 United is the final book of the Alienated series by Melissa Landers. As a whole, the series has been fun, even though the love story is a bit nauseatingly adorable at times. It’s the world building that really makes the series worth reading. As you might remember from Alienated and Invaded, there is much more at stake than simply whether or not the two main characters or their civilizations can get along.

In United, the series continues to explore the concept of two planets getting along and what happens when such a new alliance is threatened. I think my favorite thing about it is the introduction of a non-humanoid species. So many stories, both in books and television, use either humanoid or insect-like ones and I found it interesting to find something fairly distant here. That said it’s also interesting to have a book where not all of the plans go as planned. In fact, none go as planned, which is probably more kin to real life anyway.

Beginning with Alienated, I appreciate the way Cara wasn’t meant to take over anything. She had ambitions and interest in what was going on, which kickstarted her involvement, but she was a kid and treated as one until her actions proved her able to do and be more. Her level of involvement in decision making by this book just made sense because of events from others but I appreciated the way she still messed up and had compassion at the wrong times and didn’t always know the best way to handle people who were trying to get what they wanted out of her. The growth arc of both her and Aelyx is fun to watch and makes sense for their age group. While wise in what they were experienced in, they didn’t have the breadth of experience that their mentors had and I appreciated the involvement of mentors and parents throughout the series and particularly here. I loved her parents from the first book. They were adorable.

My only problem with the series is the love stories. None are so much problematic as they are too simple and unrealistic. Perhaps idealistic is the better work. They seem to have met the loves of their lives incredibly early. Then again, it is a YA romance and where would we be with that kind of hope? Not that this sort of thing doesn’t happen but I don’t believe it does with the prevalence there appears in this series.

As a book on its own, I found it fun with nauseating love scenes. The puzzle that is the plot was entertaining as were the characters. They’re a little one-sided in that same way as most of our favorite movie superheroes, which I don’t find to be a bad thing when I’m in the mood for it. Some days I want something deep and dark and thought provoking and some days I’d rather read a light YA Sci-fi/romance. The whole series is actually really great for a brain break and just what I needed. As the culmination to this particular series, it is everything I wanted it to be. The resolution for every character is about what I wanted and in a way that isn’t too far fetched or cheesy. A few things were uncharacteristic favors, but that can be true to life as well when you catch someone at the right time too.

As with the others, I borrowed the audiobook from my local library but they are available from other sources as well. Click on the cover image above to be redirected to Booklikes for purchase options worldwide or add to Goodreads for later.